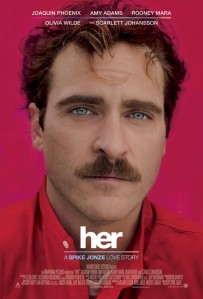 This movie creates an intense inner mental and emotional experience, more than being merely an observed visual narrative.

Joaquin Phoenix, a surrogate love-letter writer, plays a nerdy yet cool guy who begins a relationship with a computer O.S. (Operating System), voiced by the sexy Scarlett Johansson.

Filmed in Shanghai, China, it is the rightful companion to CODE 46, which also was largely filmed there. I was expecting to see Samantha Morton in the movie, but in fact she is the producer, which blew my mind.

The online voice/personality is so empathetic and understanding and caring–that Phoenix’ character falls in love with her.

This film probably has more extreme close-ups than any movie ever made, tracking the intimate nature of Phoenix’ character’s relationship (it’s in his ear).

Don’t think something like this could happen in your life? Notice your strong feelings as you watch this movie–it happens every time you “fall in love” with a screen character in a movie.

Now imagine how much more intense that experience would be if a movie character talked back to you and interacted with you over months and years.

After a while, would you remember or care that this person that you have such a wonderful relationship with is not human?

Human beings want love and understanding so badly that I think many of us would take even the similitude of it from a computer.

There are several parallels we can draw from Phoenix’ relationship with the O.S. (named “Samantha,” –a wink to Samantha Morton) to a believer’s spiritual connection and experiences with God.

This movie works and has such beautiful cinematographic and subtle and nuanced emotional scenes in it that it is nothing short of amazing. It has been a long time since I saw a movie that was this good on so many levels.

There is one point where the screen goes blank for an extended couple of moments–I actually closed my eyes before they did that–what sentient timing by the director.

“her” is an absolute and immediate commentary on our times. What happens in the film is not at all far-fetched. People fall in love with music, with books–even with movies. We love certain things and even have a “relationship” with them. We even use that word.

People walk around completely entranced by their phone screens. Getting a message on a phone seems far more important than sitting next to someone and having them talk to us.

Imagine how immersive, seductive, and powerful it would be to talk to an artificial online personality that talks back and really gets to know you.

The thing that happens in this movie is going to happen more and more in our lives.

Like memories and past relationships, the movie literally says that love lives on in the hearts of those who been loved–forever.

Also, the movie has a great ending that shows love and appreciation for human-to-human conversation and relationships.

I strongly recommend that you see this movie–alone if possible.

This movie, just like CODE 46, with its intelligence, emotion, evocative music and soaring subdued visuals of Shanghai city lights at night, is ~wondrous~.